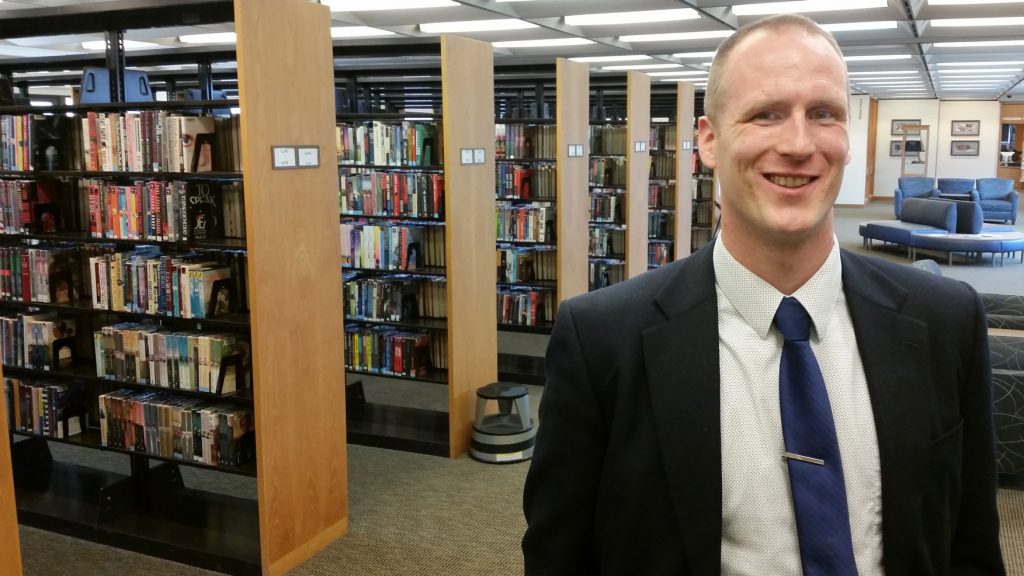 William O’Hearn, the new director of Lincoln Library in Springfield.

William “Will” O’Hearn jokes that he started his career in library science at age 16, although he was less concerned with learning at the time and more concerned with earning money for gas. However, that early exposure blossomed into a love for public libraries.

The Springfield City Council confirmed O’Hearn to lead Lincoln Library in Springfield last week, and he’s diving into the work with a passion for the learning public libraries enable.

“I kind of happened into libraries serendipitously,” O’Hearn said.

Although he originally attended Northern Illinois University to study business management in human resources (“I love people,” he said.), he ultimately returned to the thing which animates him most.

“Turns out, human resources is a lot more spreadsheets than I would have wanted,” he said with a laugh. “I kind of revisited in my mind, ‘What is it that really makes me happy?’ So, I went back into libraries, because that’s what made me feel like I was happy, like I was being useful; it really filled my cup.”

O’Hearn eventually went on to earn a master’s degree in library and information science from the University of Wisconsin Milwaukee. He worked at the public library in Pike’s Peak, Colorado, before taking his most recent job as supervisor of the Cedar Rapids Public Library Downtown Branch.

Speaking at his new office on the third floor of Springfield’s Lincoln Library, O’Hearn says his love of public libraries stems from his experiences in them as a young man. While working at the public library in Marengo, Illinois, near Rockford, O’Hearn frequently helped a patron with research, even though that patron’s topic of interest was privatizing public libraries.

“There’s something selfless about them (public libraries),” O’Hearn said. “It was always, ‘We’ll help you however we can, even if it’s not in our best interest.’ … He was probably one of our best users; He used all the services to the max. There’s something beautiful about that.”

Even before starting his first library job as a teenager, O’Hearn found himself at the library every week with his mother, developing interests like computers and comedy.O’Hearn credits Nancy Huntley, who announced her retirement as library director in May after 24 years, with growing Lincoln Library’s technological offerings and overseeing a recent renovation. He says his immediate focus is community outreach.

“I’ve died of dysentery a few times,” he joked, referring to a common cause of death in the popular Oregon Trail video game. “All the things I love today, I really pioneered at the library and refined. You really kind of find yourself there, and that really stayed with me.”

What drew O’Hearn to Springfield – besides one of his heroes, Abe Lincoln – was his experiences while visiting Springfield with his wife, a domestic violence counselor, while she attended training conferences here.

“What really stuck out to me was the kindness everyone showed me,” he said. “It was really welcoming. I’m recently a father, and it felt like a really good place to raise a family.

O’Hearn sees Lincoln Library not only as a public institution for learning and growth, but as a business-like investment in the common good. One example, he says, is the capacity for public libraries to bridge the “digital divide,” a term used to describe disparities in computer and Internet access. An estimated 100 million people don’t have access to the Internet at home, according to the Federal Communications Commission. Public libraries typically offer free access to computers, along with help finding information.

“There’s these things called job applications, and they’re kind of important, and many places don’t take paper ones,” O’Hearn said.”If people in our community (without Internet access) would like to apply for those jobs, there’s not a lot of other opportunities for them. That really adds to the return on investment and direct impact for the community.”

O’Hearn credits Nancy Huntley, who announced her retirement as library director in May after 24 years, with growing Lincoln Library’s technological offerings and overseeing a recent renovation. He says his immediate focus is community outreach.

“If you haven’t come to the library in a while, I would definitely implore you to come take a look,” he said. “Your library card really is a gateway to so much of the world.”