A pretzel retailer based in Pennsylvania is expanding to Springfield.

Philly Pretzel Factory, which sells ready-to-eat pretzels and related foods, is seeking franchise operators to open stores in Springfield. The company has 167 franchises open in 19 states.

Tom Monaghan, chief development officer for Philly Pretzel Factory, says most of the company’s stores are in the northern part of the nation’s east coast. However, he says the company has been building internal infrastructure to expand to new markets. Monaghan says the Springfield metropolitan statistical area (MSA) is attractive because of its relatively large under-18 population and strong discretionary income level. 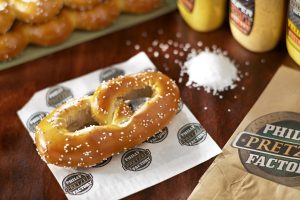 A stock image of a Philly Pretzel Factory pretzel.

“The Springfield MSA has one of the highest percentages of children and teenagers in the country,” he said.

Young people are “a huge driver” of Philly Pretzel Factory sales, he says. Rather than emphasize single sales, however, Monaghan says the company focuses on high-volume sales for fundraisers, birthday parties and other group activities.

Monaghan says the company has begun vetting potential franchise operators in Springfield, and the first store could be open by the end of the year. Each store has an average of 10 to 15 employees, he said. Philly Pretzel Factory has three store models, Monaghan says, including standalone shops, stores within other retail spaces like Walmart and stores inside arenas or universities. Springfield could support at least four stores among the three models, he says.