A longtime Springfield clock retailer is moving downtown, clearing the way for changes at a neighboring restaurant.

Ben McCormick, an employee at Springfield Clock Shop and brother of owner John McCormick, says the new location is being remodeled, though he’s not sure when it will open. McCormick says the move was precipitated by the poor condition of the former location.

That wasn’t a problem for Mekong Cafe, the Thai, Laotian and Vietnamese restaurant next door which purchased the building and had it demolished. On April 7, the restaurant posted a picture of an excavator on its Facebook page with the caption, “Big changes coming to Mekong Cafe!” 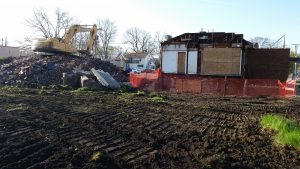 The remains of the former Springfield Clock Shop location on South Grand Avenue, with Mekong Cafe on the right.

Lisa Mahnee, owner of Mekong Cafe, says the additional space will be used for customer parking initially, and the restaurant will expand its space into an area of the existing building formerly occupied by a barber shop. Mahnee says the restaurant could expand further in the future, but demolishing the former clock store was more about improving the appearance of the block.

Mekong Cafe is temporarily closed for construction and reopens on April 17.