In 1981, President Ronald Reagan signed the Historic Rehabilitation Tax Credit into law as part of the Economic Recovery Act. Since then, the credits have been used to repurpose more than 40,000 historic buildings across the nation, including 253 such buildings in Illinois and several in Springfield.

“Our historic tax credits have made the preservation of our older buildings not only a matter of respect for beauty and history, but of course for economic good sense,” Reagan said in 1984.

Now, Republican legislation in Washington, D.C., would axe the credits among other cuts to the federal budget.

“If we eliminate this program, we are eliminating $5 billion in additional investments that will come into the federal government, so it doesn’t make sense,” said Bonnie McDonald, president and CEO of historic preservation group Landmarks Illinois. “The program is good for the taxpayer, it actually makes more money than it costs.”

The federal Historic Rehabilitation Tax Credit, overseen by the National Park Service, provides a 20-percent tax credit for the qualifying expenses of rehabilitating historic buildings. It enables rehabilitation projects that may not be economically feasible otherwise, and proponents say it pays for itself many times over by generating new tax revenue.

The federal budget plan proposed by U.S. House Speaker Paul Ryan, R-Wisconsin, would eliminate many federal tax credit programs, including the historic tax credit. The proposal prompted Landmarks Illinois to include the credits on its 2017 Most Endangered Historic Places list issued on April 6. The group is a nonprofit that advocates for the preservation of historic sites, and it’s pushing the state and federal government to keep the federal tax credits in order to maintain investment for historic places that results in more construction jobs and economic opportunities.

Between 2002 and 2015, Illinois received $509 million in federal historic tax credits designated for restoring historic buildings, according to Landmarks Illinois. A total of 253 completed projects generated an estimated $3 billion in total development and created roughly 40,000 jobs, the group says. 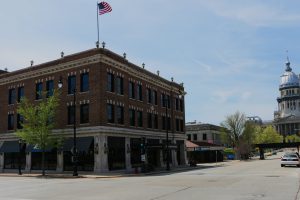 The Illinois National Bank building was renovated with help from the federal tax credit being considered for elimination.

“We ended up rehabbing two buildings in downtown Springfield in order to house over 200 people that now work downtown on a daily basis, and so it was our commitment and our desire to do that for downtown Springfield, and it was a choice that we felt was important for the community,” Phalen said.

If it hadn’t been for the tax credits, INB would have had to purchase a building outside of downtown to hold employees, she added.

Illinois currently ranks eighth in the nation for the number of historic projects that use federal tax credits, said a spokesman for the Illinois Historic Preservation Agency. In 2015, Illinois was in first place.

Administered at the state level by the Illinois Historic Preservation Agency, the 20-percent tax credit is awarded to owners of historical buildings which generate revenue and undergo significant rehabilitation.

To qualify for a federal tax credit, buildings must have been built at least 50 years ago and be listed on the National Register of Historic Places.

Ryan’s legislation to axe the federal historic tax credit will be debated by the House Ways and Means Committee, chaired by U.S. Rep. Peter Roskam, a Republican from Wheaton, Illinois.

When asked if Roskam supported eliminating the historic tax credit that benefited many communities in Illinois, Roskam’s office said it had no information on the proposed legislation.

The federal historic tax credits are strong tools for older downtown areas and neighborhoods, said Mike Jackson, an architect and former IHPA manager. Although supportive of the federal tax credits, Jackson recommends that the state also pitch in and offer tax credits to owners of buildings that qualify to help boost preservation.

“A combination of state and federal would be the best incentive to use this program statewide,” Jackson said.

However, Illinois probably won’t embrace a state-sponsored historic tax credit due to the state’s fiscal budget crisis, he added.

Losing the federal historic tax credits could affect the 134 buildings located in downtown Springfield that would qualify for the credits, limiting the fiscal benefit of historic sites.
The map above shows the locations of historic buildings in Springfield’s downtown, according to the
National Register of Historic Places.

The YWCA building that occupied 421 East Jackson Street since 1912 was a prime candidate to receive the historic tax credit before the City of Springfield opted to tear down the century-old building. A developer which had proposed reusing the building for apartments and building additional apartments on that block pulled out when the federal tax credit was no longer available to help offset costs. The city is currently seeking proposals for the site.

Frank Butterfield, Springfield area director of Landmarks Illinois and a Springfield resident, said it’s wonderful that Springfield has many historic buildings that house businesses and apartments.

“The community of Springfield continues to talk about ways to revitalize downtown,” he said, “and the tax credit is the key to making that happen.”