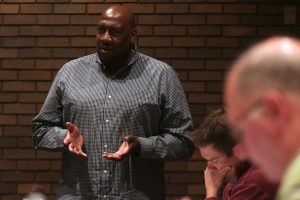 A popular Springfield eatery is hoping to establish a more permanent home with help from TIF funds.

MJ’s Fish and Chicken Express is seeking $55,000 in TIF money to relocate to Enos Park. The money would fund half of the purchase price for 716 E. Enos St., the former site of Susie Q’s restaurant.

Jerome Taylor, owner of MJ’s Fish and Chicken Express, says he started the restaurant as a food truck in August 2015 and soon had to rent space at 230 South Grand Ave East. Taylor says the payment on the new location would be the same as he’s currently paying in rent, but the new building is a turn-key operation, complete with cooking equipment from the previous restaurant.

The new location offers more space and would seat about 30 people, Taylor said. He says he currently has two part-time employees, but if the move is successful, he hopes to make them full-time employees and possibly hire more workers. Taylor says the move would also allow him to expand the catering aspect of his business. He says he doesn’t plan to include video gambling terminals, and he isn’t seeking a liquor license for now.

“I would want to be known more for a restaurant that may a serve an alcoholic beverage more so than a place where people go to drink,” he said.

Correction: This story has been edited to correct the spelling of Susie Q’s restaurant.