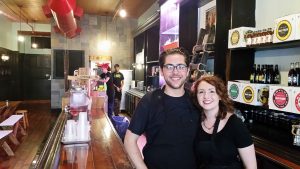 Corey Faucon, left, is chef and owner of Long 9 Junction.

Owning a restaurant has long been a dream, he says, and downtown was the natural place to open his.

“I’ve always wanted to do something for Springfield,” he said. “There’s a need for chef-driven restaurants here in our hometown. I think it’s a great market.”

Faucon describes the food – including his slow-roasted beef – as “ecclectic, hearty and down-home simple,” while the seating area in this former Quizno’s is filled with wooden tables Faucon and his father built.

“I like to think that the restaurant reflects my style,” he said. “My motto is to give people what they want, but like they’ve never seen before.”