The trouble with trash

The trouble with trash

Last year, the City of Springfield reached a deal with waste haulers to address the problem. While neighborhood advocates say the situation has improved, they want a fundamental change to the system that they believe would end the problem once and for all.

Carol Kneedler, chair of Springfield’s Inner City Older Neighborhoods (ICON), says the problem is that some residents – whether home owners or renters – don’t maintain garbage service, instead dumping unwanted items and trash in alleys or on curbs.

In 2016, the Springfield City Council voted to raise the cap on what waste haulers may charge customers, from $11.25 to $15 for a single can and from $13.75 to $18 for two cans. In return, haulers agreed to pick up overfilled trash cans and report large items abandoned in alleys for city workers to remove.

The city’s existing ordinance requires home owners or renters to have garbage picked up at least once per week. Under the ordinance, property owners bear the ultimate responsibility to ensure garbage is picked up, even if a renter fails to maintain trash service.

The ordinance calls for the Office of Public Works to examine the monthly reports from the waste haulers to determine if any homes don’t have weekly service. The department is supposed to assign a hauler to pick up waste from any homes that don’t have service, and the cost of service may be charged to the owner’s utility bill.  The agreement also allows the haulers to charge a customer for a second can when the customer’s waste routinely exceeds a single can.

Kneedler and Polly Poskin, president of the Harvard Park Neighborhood Association, credit the three waste haulers with improving their pickup service, but they say the problem still exists. 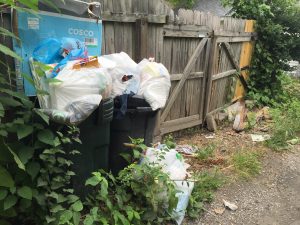 Poskin says enforcement of the ordinance has been complaint-driven in practice. Reconciling records from the haulers with a master list of residences each month has proved difficult and time-consuming to the Public Works department, she says, meaning city inspectors are typically sent to investigate a possible violation only when a neighbor complains.

“Somebody usually has to make a complaint about overflowing garbage or garbage strewn about,” Poskin said.

Mark Mahoney, director of the Office of Public Works, says the changes need time to work. He says the housing division’s enforcement efforts typically increase during the spring, not only for garbage violations but also for issues like overgrown weeds. Mahoney notes that the waste haulers are indeed more aggressive now about reporting bulky items left in alleys so that city workers can remove them.

Mahoney says the changes last year allowed the city to collect a fine from chronic violators even if they correct the problem, which may deter temporary fixes from residences which sign up for service to avoid a fine and later drop the service.

“This is going to be our first full year, so we’ll have a better picture of how effective the changes were,” Mahoney said. “We’ll see how it goes this season and make adjustments.”

His department is also upgrading to new software which Mahoney says will allow easier identification of chronic garbage violators. Mahoney says the housing division has five inspectors who handle thousands of complaints each year for all sorts of violations, but the current software systems don’t allow easy analysis of one type of violation. That means it’s unclear how much time the inspectors spend on garbage violations alone.

Poskin and Kneedler say the best solution to inconsistent enforcement is to change how customers are billed for garbage service. Instead of each customer finding a hauler and signing up for service, Poskin and Kneedler say Springfield City Water, Light and Power should automatically bill residential customers for trash service and remit payment to the appropriate hauler. Under that arrangement, customers would still have the ability to choose a hauler, they say, and the city could easily assign a hauler to any customer who hasn’t chosen one.

Mahoney doesn’t have an opinion one way or the other on that idea, simply saying he’ll work to implement whatever the Springfield City Council decides.

The trouble with garbage collection isn’t limited to homes without service, Poskin and Kneedler say. 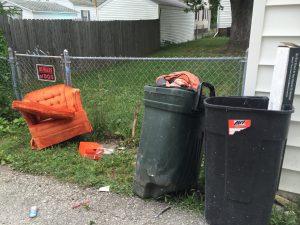 Large items like furniture should be picked up more often, Poskin and Kneedler say. Photo courtesy of Polly Poskin.

They’re frustrated by the city’s policy on bulky item pickup, which allows each residence two such pickups per year, with three items each time. Poskin and Kneedler say that’s not enough; they say there should be monthly pickup of bulky items, rotating among neighborhoods. Kneedler says many residents simply store large unwanted items in attics, basements and garages because the current pickup system is inadequate.

“It may be painful in the short run,” Kneedler said, “but if people have an avenue to get rid of things, demand would lessen.”

In addition to limited pickups of large items, certain types of electronics like old TVs and computer monitors can be costly to dispose of legally because they contain leaded glass that’s difficult to recycle.

Even BLH Computers, which offers free recycling of most electronics to city residents, charges a $20 fee to accept standard CRT TVs and $40 to accept larger console or projection TVs. It’s common to see old TVs abandoned in alleys and empty lots in some older neighborhoods.

Mahoney says the city has a pending request for proposals to increase collection of large electronic items and other bulky items. He says increasing the garbage rate and recycling fee allowed the city to fully fund its pickup programs.

When the Springfield City Council considered the CWLP billing model for the garbage system in 2012, resistance from Lake Area Disposal and Illini Disposal scuttled the proposal. With Waste Management’s acquisition of Illini Disposal, Lake Area would likely stand alone in further attempts to prevent a switch to centralized billing. The larger waste haulers serving Springfield have typically stayed out of local politics. Lisa Disbrow, a spokesperson for Waste Management of Illinois, Inc., said the company provides service in several municipalities and works within each municipality’s requirements. Dan Winters, general manager of Republic Services in Springfield, said his company also adapts to meet the needs of the city.

Rick Davis, a spokesman for Lake Area Disposal, said the company’s allies are its customers. He says centralized waste billing would amount to government confiscating a private business asset – the haulers’ customer lists.

“All I can tell you is that last year, there was no appetite on the city council for this at all,” Davis said. “Several aldermen expressed to us they would never agree to centralized billing.”
Poskin says the existence of only one locally-owned hauler doesn’t really change the political landscape of garbage.

“I think the locally-owned hauler exerts the most political pressure and is accommodated the most by city leadership,” she said.

Kneedler says Lake Area Disposal “has not been a friend to older neighborhoods.”

“They haven’t been cooperative,” she said. “And in many cases, we feel they have been obstructionist.”
Davis declined to respond, simply calling Kneedler’s claim “baseless.”

One area in which Kneedler, Poskin and Mahoney strongly agree is the need for education on garbage collection. Mahoney says his department has plans to ramp up communication with the public about garbage standards. Poskin says standardization and uniformity mean predictability for residents.

“This should all be as predictable as the sun coming up in the east,” she said. “Otherwise, people just do it at their will and whim. You can’t maintain an attractive, viable city when there is no real system.”