It pains Chris Schaller to see those he considers his brothers living on the street or in homeless shelters, and he wants to do something about it.

“They’ve been failed by the system,” he said.

Schaller, who served as an engineer in the U.S. Army Reserve in Iraq during 2003 and 2004, is spearheading Operation Fight Veteran Homelessness to house every homeless veteran in Springfield. So far, Schaller says the effort has gotten eight veterans off the street, and he aims to help the remaining 45 homeless veterans in Springfield get housing and work in the next six months.

Known as “the Illinois Mortgage Man” on his syndicated radio show, Schaller is a certified mortgage planner at Diamond Residential Mortgage Corporation, which he and a group of partners started in Springfield in 2007 and grew to 60 offices around the country. 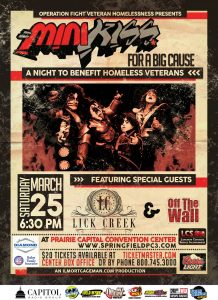 The flier for the March 25 event.

Schaller says that while traveling around the country for work, he often sees and speaks to homeless veterans.

Schaller says Operation Fight Veteran Homelessness, which is seeking nonprofit status from the Internal Revenue Service, came about when a friend rehabilitated a building which had been slated for demolition and turned it into a home for veterans.

“Gov. (Bruce) Rauner was at the event, and he turned to my buddy and said, ‘You guys need to do more of these,’ ” Schaller said.

Schaller committed to donating a portion of every Springfield mortgage he closed in 2017 to help get more veterans off the street, but he didn’t stop there. He lobbied the national board of Diamond Residential Mortgage to donate part of the proceeds of every mortgage closed at the company’s other offices. Schaller estimates the donations will amount to about $250,000 per year.

To raise further funds for Operation Fight Veteran Homelessness, Schaller is organizing a concert, Mini Kiss for a Big Cause, on March 25 at the Prairie Capital Convention Center. The event will feature live music from Mini KISS, auctions and more.