The City of Springfield is asking for another round of proposals for the North Mansion Block in downtown Springfield, following the demolition of the historic YWCA building and a developer backing out of proposed housing on the block.

The block has long been a source of controversy downtown, with multiple attempts to repurpose it spanning at least three mayoral administrations.

On Friday, the city released a new request for proposal at its North Mansion Block website, asking for qualified partners to suggest new developments for the block. Mayor Jim Langfelder called the 2.35-acre block “a rare opportunity for a full block development at the heart of downtown Springfield.”

“The ideal proposal will create a street-level downtown event center and urban square, which includes interactive plaza space,” Langfelder wrote in a letter to potential developers.

The block sits north of the Illinois Executive Mansion across historic Jackson Street. Until recently, it held the historic YWCA building that was completed in March 1913 and served as home to the now disbanded Young Women’s Christian Association of Springfield until 2007. A storm damaged the building’s roof in 2006, and the YWCA was unable to afford complete repairs. The organization sold the building in 2007 to a developer who wanted to build apartments on the block using $2.5 million in TIF money, but the Springfield City Council voted against approving the funds.

The city ultimately purchased the entire block and the now-demolished building in 2014 for more than $1.5 million and may have to spend more TIF money to subsidize development on the block. 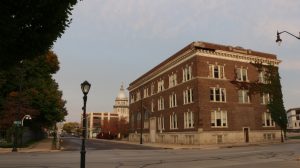 The former YWCA building as it appeared in Oct. 2016. Photo by Patrick Yeagle.

The most recent attempt to repurpose the block collapsed when Indianapolis-based developer Flaherty Collins abandoned a bid to build apartments there. The developer suggested creating 200 apartments in new construction and 24 apartments within the YWCA building, which would have allowed historic preservation tax credits to help subsidize the overall cost. Langfelder expressed concern about the TIF request for the YWCA portion of the project, estimated at between $7 million and $9 million. Flaherty Collins backed out when the city moved ahead to demolish the building, saying the demolition eliminated access to the historic tax credits that made the project feasible.

The city’s current request for proposal says a developer would receive a long-term lease on the block with favorable terms. The RFP calls for a ideas like a public plaza with fountains or a large movie screen, housing or other “architecturally significant” buildings.

The deadline for proposals is May 15.