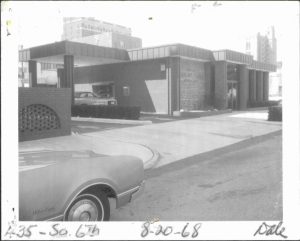 The now-vacant former Marine Bank building at 435 S. Sixth St., shortly after its completion in 1968.

Illinois Realtors, based at 522 S. Fifth St. in Springfield, owns the former Marine Bank building at 435 S. Sixth St. The vacant building, currently used as a parking  partially blocks the connection between unconnected pieces of the east-west Jackson Street.

Jackson Street is one of Springfield’s oldest streets, but the land between Fifth and Sixth streets along that route was never actually part of the street because of the Town Branch creek, which was later converted into a sewer.

IR plans to demolish the building and remove the asphalt parking lot on the site, creating room for a Bicentennial Plaza to be completed in time for Illinois’ 200th anniversary of statehood in 2018. Ownership and maintenance of the plaza would remain with IR after completion of the project.

Springfield landscape architects Massie Massie & Associates is designing the space, while Crawford, Murphy and Tilly of Springfield is handling the engineering.

The TIF request by IR would represent about 39 percent of the total project cost. The Springfield Economic Development Commission is slated to consider the proposal at its Feb. 14 meeting. Not on the agenda for the meeting is a proposal to use TIF money for the city’s purchase of the vacant building at 521. E. Washington St., formerly the National Museum of Surveying. That proposal faltered because of questions about the best use of TIF funds.

Correction: This article has been changed to reflect a name change from Illinois Association of Realtors to Illinois Realtors.