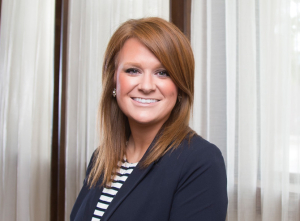 Emily Becker, general manager at the Sangamo Club in Springfield, is stepping down in June.

Becker is relocating to Louisiana, and she says she hopes to leave the club well-positioned for the future.

“I absolutely loved our membership,” Becker said, describing what she liked most about the Sangamo Club. “I loved being able to go above and beyond our members’ expectations.”

Becker, a Springfield native, first started at the Sangamo Club as director of membership services in 2008. She left the club in 2012 and returned in 2014 as general manager.

Becker’s move to Louisiana comes about because her boyfriend, Paul Kabbes, recently accepted a position at Louisiana Tech University in Ruston, Louisiana. Kabbes is leaving his position as associate athletic director for external operations at the University of Illinois-Springfield Athletics.

Among the biggest challenges Becker faced during her time as general manager at the Sangamo Club was the hiring of a new executive chef. Joseph Martin assumed the role last year when the club’s former executive chef, Larry Langley, retired after 42 years. It was “a culture shock,” Becker says, because of Langley’s long tenure at the Sangamo Club, but she aimed to be transparent with the board of directors and get the buy-in of the club’s membership before making any big changes.

Becker says her biggest accomplishment is revitalizing the club’s membership and leaving it with energy for continued growth.

“I hope we’re really well-positioned to continue on with that revitalization and an emphasis on nurturing emerging professionals,” she said.

Becker is thankful for the support from Sangamo Club members, as well as the staff.

“They’ve really bought into the whole mission of bringing the club to the place it needs to be,” she said.

Mark Denzler, president-elect of the Sangamo Club board of directors, said the board is in the early stages of finding a replacement and hopes to have the new general manager in place by summer.

“While we are sad to see Emily leave, this presents a great opportunity to find a vibrant new leader who can take our Club to the next level,” Denzler said. “We have a strong team in place, including Rich (Riedesel) and Chef Joe, who will work with Emily and the board to ensure that members have an excellent dining experience as we transition over the next several months.”

“Emily has been a wonderful leader for the Sangamo Club and a great member of our community,” Denzler said “She helped bring about wonderful changes at the club and we will miss her passion, dedication, and vision. We wish her and Paul all the best on their exciting new journey.”