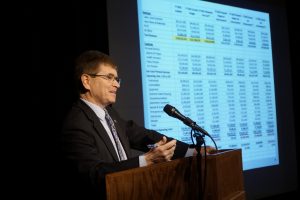 Springfield Mayor Jim Langfelder explains his proposal to increase a handful of taxes at a Jan. 27 meeting of the Citizens Club of Springfield. Photo by Lee Milner.

The combined cuts would save more than $3.8 million in the current fiscal year, according to the aldermen. However, a spokeswoman for the mayor says the budget deficit can’t be filled with cuts alone, and at least one alderman has concerns about the feasibility of the cuts.

A press release announcing the proposal was distributed Monday afternoon, calling for saving $350,000 by cutting 2 percent from the city’s non-personnel operating lines, saving $1.1 million by eliminating vacancies and making other reductions, transferring $1.3 million to the city’s corporate fund from City Water, Light and Power, and saving $1.1 million by delaying improvements to the city’s Municipal Center Complex.

“With the present budget situation the right thing to do is to make cuts, slow down spending, eliminate as many vacant positions as possible, and delay major projects,” said Ward 9 Ald. Jim Donelan. “A large portion of our population works for the State of Illinois and this is not the time to increase their financial burden.”

Speaking at the Citizens Club of Springfield on Jan. 27, Langfelder made the case for his plan by explaining that city revenue is down because of an anomalous dip in sales taxes also observed in other municipalities. Langfelder also said the city’s obligations to fully fund police and fire pensions have rapidly increased since 2003.

Langfelder said the tax increase proposals are in line with comparable municipalities in the region. He also said the city has cut about 260 employees since 2006, stabilized City Water, Light and Power’s electric fund and saved $9 million at CWLP on a renegotiated wind energy contract.

Julia Frevert, the mayor’s spokeswoman, said she had not yet seen the city council’s proposal for cuts, but she cautioned that the projected $3.85 million in cuts alone would not be enough to close the $5 million budget deficit. She noted that every city department already proposed its own cuts of between 2 percent and 5 percent in the mayor’s budget plan.

Fulgenzi said he isn’t named because he told the other aldermen he hasn’t made up his mind on the specific proposals in the press release. Speaking generally, however, Fulgenzi said that he “always thought cuts would be necessary before we had any tax increases.”

Theilen said he has concerns about some of the proposed cuts. Among other concerns, he says it’s usually not possible to simply make flat cuts like the proposed 2-percent reduction to the city’s non-personnel operating lines.

“For me, taking a broad brush across the board on everything but personnel – I’m sorry, but that doesn’t cut it,” he said. “You’re probably looking at between one in five and one in seven items that cannot be cut.”

Theilen also notes that transferring $1.3 million to the city from CWLP could lower the city’s bond rating. The city previously rebated $4.4 million in PILOT (payment in lieu of taxes) funds to CWLP to stabilize the utility’s electricity fund. As a result, the city’s bond rating was upgraded, but Theilen worries that reversing part of that payment may affect the rating and may not even be legal.

Theilen says he does support the mayor’s proposal to raise the telecommunication tax, which funds Lincoln Library. The tax on landline telephones was created in 2009, Theilen said, but about one-third of those lines no longer exist because residents are increasingly using cell phones.

“Raising the telecom tax is just restoring funding to the library and not taking tax from other sources to do it,” Theilen said.

Donelan said the city is in a “revenue crisis,” but the aldermen thought it best to make cuts before raising taxes.

“We think this is a proposal with some things that should be considered,” he said, adding the the proposal is only a starting point for discussion. “We’re open to changes.”

The next meeting of the Springfield City Council is Feb. 7. The city’s 2018 fiscal year begins March 1.

This article has been updated to include input from Ward 8 Ald. Kris Theilen.