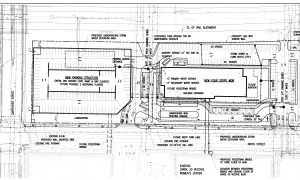 The preliminary plans for HSHS St. John’s new facility on Ninth Street, as submitted to the Land Subdivision Committee.

HSHS St. John’s Hospital in Springfield is drawing closer to building a new facility along Ninth Street, focusing on women’s and children’s health.

The hospital’s plans received a favorable vote at a land use meeting on Jan. 5, and a state oversight board is slated to consider the plans in March.

The proposal is for a new four-story, 85,500-square-foot building and a parking garage on the east side of Ninth Street, across from the existing hospital. The new facility would house medical offices for St. John’s and SIU School of Medicine, with a focus on care for women and children. The estimated cost is $48.3 million.

On Jan. 5, the Land Subdivision Committee of the Springfield-Sangamon County Regional Planning Commission voted to recommend approval of the project, subject to a handful of minor document revisions. The committee’s vote, while nonbinding, means the project will be recommended favorably to the Springfield City Council for final land use approval.

Chris Campbell, vice president and strategy officer for the Central Illinois Division of HSHS, says projects of this size require plenty of planning, and other governmental bodies must approve the plans before construction can begin. One is the Illinois Health Facilities Review Board, a state agency which evaluates the need for new health facilities. Campbell says HSHS submitted its application for review to the board last month. The board issued a notice on Dec. 29 that the application was deemed complete – a feat in itself because the application spans 100 pages. A hearing to consider the application is scheduled for March 14.

Campbell says the new facility will allow HSHS St. John’s Hospital to consolidate its scattered offices for women’s and children’s health, with inpatient appointments at the existing hospital and outpatient appointments at the new facility. A climate-controlled pedestrian bridge over Ninth Street would connect the new building with the existing Carol Jo Vecchie Women’s Center.

“Our end goal is a good patient experience,” Campbell said.

Campbell says that if all of the necessary approvals are obtained, construction could start this summer and last about a year, meaning the new building could be in use some time in the summer of 2018.

He adds that HSHS is being careful not to harm any potential archaeological remains from the 1908 race riot which may exist along the 10th Street rail corridor.

“We are absolutely committed to being respectful of that entire process and that aspect of the property,” he said.