An architect reflects on the 1960s Old State Capitol facelift

At that time, city fathers, historic preservationists and the state’s conservation agency were discussing how the burgeoning national trend toward suburban fringe shopping mall development would begin to draw commerce away from downtowns.

It was in this forward-looking spirit that Gov. Otto Kerner pledged that the state would pay two-thirds of the $1 million cost to renovate the recently-vacated Sangamon County Courthouse – the former Old State Capitol– if Abraham Lincoln Association boosters could come up with the remaining funds. The project, which would eventually restore the 19th century dome and old-time interior found a friend in state historian Clyde Walton, who along with young architects at the Springfield firm of Ferry & Henderson Architects, recognized its potential as a Lincoln-connected tourism draw.

In the early 1960s, August “Augie” Wisnoski, AIA, was an associate architect who had joined Ferry & Henderson in their 500 square foot, two-room loft office on Jackson Street between Sixth and Seventh streets. It was there, Wisnoski remembers, that the firm conceived the historic capitol building restoration plan, which would morph into a complex project to include a new home for the state’s historical library, offices and two stories of underground parking. 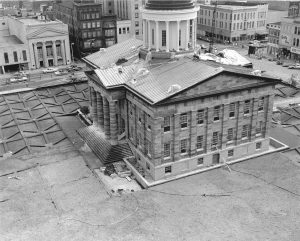 After the current state capitol building on Second Street was completed early in the 20th century, the former Old State Capitol structure was raised 11 feet and surrounded by an earthen berm to begin its almost 60-year run as Sangamon County’s courthouse.

In 1959, Trutter and Turley Architects were tapped by Springfield’s Public Building Commission to design a modern combined Sangamon County and Springfield municipal complex between Eighth and Ninth streets facing East Monroe Street. At that point, the county’s move from the Old State Capitol motivated the late Earl “Wally” Henderson Jr., AIA, who had an avid interest in the preservation of the building, to pursue studying its history and its mid-19th century roots, according to Wisnoski.

The humble conference room of partners Ferry, Henderson and Wisnoski had only a card table and three chairs. When meetings began in earnest with Gov. Kerner and State Historical Society officials, the architects were inclined to join the Sangamo Club, which offered space for discussion and planning, according to Wisnoski, “so that no one would see how small our shoe-string office really was.”

Recalling his role as the onsite architect in charge of construction, Wisnoski looks back at the massive project as a learning experience which involved extensive historic research of building techniques and materials of the period.

Because Ferry and Henderson’s team had discovered that a turn-of-the-century fire had destroyed early drawings of the original interiors from the 1837 Old State Capitol design by John Frances Rague, they undertook extensive research using newspapers, diaries, first-hand accounts and bills of sale to learn about the dimensions of original materials that were purchased.

“With no actual evidence of the floor plan, we had to act like sleuths,” Wisnoski recalls.

Clues came from a tour of a similar historic courthouse in Iowa that had also been designed by Rague, and scientific exploration involving partition plaster removal and layers of paint analysis.

Historically, the Old State Capitol has been a place of enduring significance. Early plans were to complete the renovation project in June 1968, which would have been the sesquicentennial of Illinois’ 1818 statehood.

“A June 16 date was chosen as a way to also commemorate the June 16, 1858 anniversary of Lincoln’s “House Divided” speech, being one of the most significant events associated with the Old State Capitol,” Wisnoski said.

More recently, a young Barack Obama announced his presidential bid at the Old State Capitol, becoming the county’s first president of African American heritage in 2008 – 150 years after Lincoln’s celebrated Civil War speech was delivered in the halls of the same building. 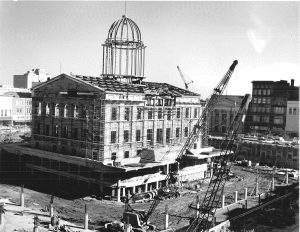 The “abyss” dug around the base of the Old State Capitol. Image courtesy of Illinois Historic Preservation Agency.

It was state historian Clyde Walton’s need for a new location for the historical library that expanded the renovation project. Between 1964 and 1968, Ferry & Henderson Architects and a host of other companies were involved in the nearly complete dismantling and reconstruction of the steel form building, covered with a skin created from the original three foot thick stone, chiseled down to an eight-inch veneer. At that point, Hanson Engineers began civil engineering for the excavation required for the subterranean parking and basement office areas.

“So, what resulted was a 330-by 330-foot abyss, 25 feet deep in the center of downtown Springfield, for more than a year,” said Wisnoski, who would be assigned as the project’s principal on-site lead. The project required traffic to be rerouted, with several streets closed in Springfield’s downtown. 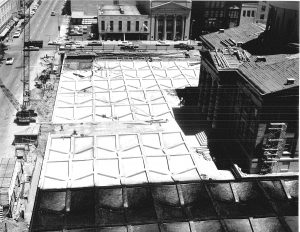 A series of parabolic dish-shaped plates supporting the building and its yard, each holding enough earth to support living trees and grass, were the brilliant design of civil engineers. However, within a couple of decades the thick tree root systems began to wander below, snaking through the parking deck into structural concrete pier supports, eventually requiring the parking garage superstructure to be re-engineered in the 1990s.

One Friday at the end of October 1967, as the construction crews were finishing up after a day working in the sprawling construction site, Wisnoski heard a tremendous explosion that shook the building. The cause was a 40-foot long channel section that had not been secured to a roof beam.

“That was a quite a Halloween trick-or-treat,” Wisnoski recalled.

With the project complete in December 1968, dedication ceremonies were held with Governor-elect Richard Ogilvie on hand. A Chicagoan, Ogilvie took note of the Ferry, Henderson and Wisnoski team, which had now earned a reputation for their historic restoration expertise. The firm would later play a role in the 1970s renovation of Illinois’ Executive Mansion, developing a design that included large brick security walls on three sides of the building. That was at the request of Ogilvie, who reportedly faced retribution threats from his earlier days as Cook County’s tough mafia-fighting sheriff.
Ferry, Henderson and Wisnosky would go on to be involved in many other notable projects, both collectively and later as a part of other firms in the Springfield area. Ferry worked as an architect in Springfield until his passing in 2015, eventually working with his son, Bruce Ferry, as Ferry & Associates. Henderson died earlier this year, but had remained active in the community long after his retirement. In a nod to his most memorable project, he persuaded the U.S. Mint to change plans for the design of a 2009 commemorative penny so the design would include a depiction of the Old State Capitol in back of a gesturing Abraham Lincoln. Wisnosky joined with Carl and Kay Fischer in 1982 to form Fischer-Wisnosky Architects, Inc., known today simply as FWAI Architects. The three architects may have gained fame early on due to the significance of the Old State Capitol project, but all went on to have long and storied careers.