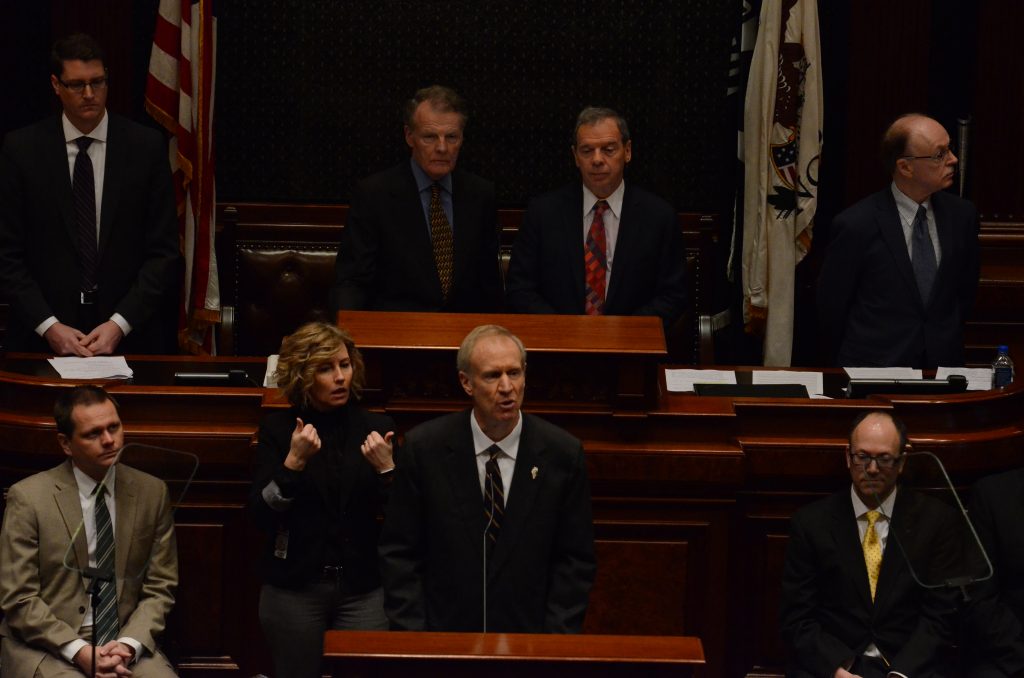 Gov. Bruce Rauner addresses lawmakers during his 2017 State of the State address in Springfield. Photo by Lee Milner.

Gov. Bruce Rauner says he is “deeply optimistic” about future investments in education, technology and business that he believes could generate jobs despite the state’s fiscal problems.

Entering his third year in office, Rauner gave his annual State of the State address to lawmakers today, saying Illinois needs a budget to be the “economic engine of the Midwest.”

Illinois has the potential of attracting technological and innovative companies that would rival Silicon Valley, Rauner said in his address. The governor didn’t mention his “Turnaround Agenda” during his speech, but he urged lawmakers to support his business-friendly proposals and other changes like term limits and redistricting reform.

The Illinois Legislative Black Caucus was disappointed with the governor’s speech, saying Rauner hasn’t offered any real solutions to the state’s problems.

Illinois has been without a state budget for a year and a half, negatively affecting nonprofits, businesses and state and local government agencies. Rauner, a Republican, vetoed the budget proposal passed by the Democrat-controlled legislature for Fiscal Year 2016, saying it was unbalanced and demanding acceptance of his Turnaround Agenda proposals. His own budget proposal, however, relied heavily on purported savings from changes to state employee pensions, which are protected from diminishment under the state constitution. State government has managed to continue operating without a budget, but the effects of the impasse are mounting, and lawmakers are eager to reach a deal.

Rauner said he was “deeply optimistic” about the future of the state and thanked legislators for working hard to reach a compromise on the budget. He commended bipartisan efforts made by Senate President John Cullerton, D-Chicago, and Senate Minority Leader Christine Radogno, R-Lemont, for working on a new legislation package informally dubbed the “grand bargain.” The intricate package includes increasing the income and corporate tax, a temporary two-year property tax freeze and changes to workers’ compensation.