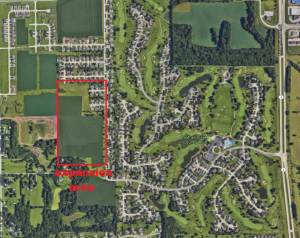 Panther Creek West subdivision on Springfield’s west side is slated to begin an expansion later this year. The plans are still being vetted by city and county agencies, but the owners hope to begin construction as soon as possible.

Darrel Thoma with Downson Farms says his family’s company, which is planning the expansion, has about 30 new lots slated for the first expansion phase. There are six phases in the proposal, which would add 150 lots to the west of the existing 113 lots. That would bring the total number of lots to 263, although a handful of those would be easements for utilities. Thoma says the permitting and approval process could be completed by August, allowing construction to begin.

The project cleared its first hurdle on Jan. 5 when it received a recommendation of approval from the Land Subdivision Committee of the Springfield-Sangamon County Regional Planning Commission. The committee is composed of representatives from several city and county agencies who examine subdivision plans to ensure they meet building and zoning codes.

Panther Creek residents Gary Warnick and Bill Gun shared a concern at the Jan. 5 meeting that the expansion could lead to flooding of their properties near existing water retention features. Greg Willman, grounds superintendent at Panther Creek Country Club, shared similar concerns about potential flooding of the club’s golf course. Gun also expressed displeasure that the street-facing edge of some new lots will be as short as 85 feet – smaller than some of the existing lots with frontages as long as 115 feet.

Thoma says any potential water retention issues will be handled at a later point in the approval process, noting that city engineers have to sign off on the plans before construction begins. Thoma also said the frontage lengths in the proposed lots match the existing lots – with the exception of the first lots laid out at the subdivision.