How does Springfield stack up with other cities?

Home/Articles/Article/How does Springfield stack up with other cities?
Previous Next

How does Springfield stack up with other cities? 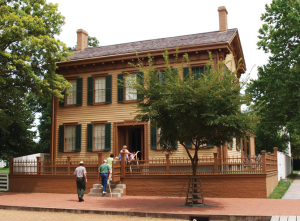 The above is a question that comes up often, as I have the good fortune of working for the American Institute of Architects, which shares exemplary community development work driven by design firms far and wide.

The impetus for these projects isn’t just for show. Civic leaders and CEO’s know that when people can live anywhere, your place in the world matters. A Harris public opinion poll asked, “What is the one overriding factor that you look for when choosing where you want to live?” Respondents voted “quality of life” highest, equal to “friends and family live there.”

Market Street Services’ report “Quality of Place and Its Role in Corporate Location Decisions” had this to say: “Dedicating public resources to cultural amenities, downtown improvements, bike trails and parks, and many other place-enhancing resources are the types of initiatives that can positively align with a company’s talent attraction and retention efforts.”

There’s no shortage of ways we could make those kinds of improvements. And we have plenty of examples to guide us. Let’s start with some unfinished business, such as completing Capitol Ave. from Second to Fourth Street, making it our own version of 16th Street in Denver or Delmar Boulevard in St. Louis.

The boards could also be taken off the windows of historic properties like the Ambidexter Institute and the Lincoln Colored Home and refurbished so they could again be a beacon in the community.  Successful forebears of this approach have included the Adams Wildlife Sanctuary, Edwards Place, the Elijah Iles, Maisenbacher, Pasfield and Strawbridge-Shepherd Houses which in turn followed earlier examples like the Dana-Thomas, Vachel Lindsay and Lincoln Homes.

Turning another surface parking lot into a sparkplug of new development is the vision for the Y block across from the Governor’s Mansion.  A chance like that comes along once in a generation.  Think Power and Light District in Kansas City or Public Square in Cleveland.

We can’t build over the town branch of Spring Creek but we could connect our signature civic and cultural assets with a great walking experience via the Jackson St. trail.

Is there a version of New York’s Highline, Chicago’s 606, Indy’s Monon Trail or Atlanta’s Beltline in our future? Imagine the Third St. rail corridor as a possibility.

Once the rail traffic moves to 10th St., we could host an indoor farmer’s market in the Amtrak station like the Pike Place Market in Seattle, Eastern Market in Washington, DC or Findlay Market in Cincinnati.

Another domino that could fall with railway rerouting is Robin Roberts Stadium. Why not think about a downtown ballpark like Joliet, Lansing or St. Paul?

Is there a win-win of flood prevention with downtown green space and water features? Champaign thought so when they uncovered Boneyard Creek and created a landscaped park around the Second St. stormwater basin.

Could we take on imposing and underutilized properties like the old Pillsbury plant and the State Armory? Minneapolis wrote the book on repurposing mills and granaries while the British have a knack for turning white elephants into cultural destinations like the Tate Modern.

In almost all of these cases, we’re dealing with limitations. But it’s also true that within each negative lies the potential for a transformative positive. There’s no reason to accept things as they are.  Other communities have faced similar liabilities and turned them into assets.  Why not Springfield?