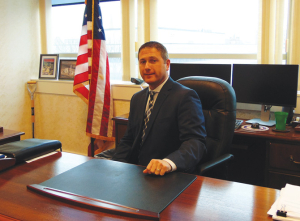 When he was growing up in Morrisonville, Doug Brown’s parents owned a bar where he was able to watch and learn about hard work and dedication – the young Doug even helped out. “Their hard work and efforts owning a business and their dedication was a big influence. They worked from sunrise until late in the evening,” he said. Brown put that knowledge of hard work to the test early in life. He worked detasseling corn in the wet, hot summers and also worked for Louis Marsh, Inc. throughout high school. “High school kids were hired to analyze oil, do viscosity tests, temperature and looking at the quality of the oil. It was an interesting job for a small town.”

A continuation of that small town feel is what Brown enjoys most about Springfield. “It is still a big community but everyone is very friendly, cost of living is low and everyone can feel safe,” he said. If he had to name one issue currently facing the city, it would be utilities and environmental regulations moving forward. “We want to keep energy rates low but also comply with regulations.”

Brown has worked for City, Water, Light and Power (CWLP) since 1994, most recently functioning as the major projects director until this past May when he was named chief utility engineer. Brown is now responsible for all utilities, including electric and water. He is also in charge of the finance department. “We want to ensure everyone has reliable water and electricity service at reasonable rates,” he said. Making sure the budget and expenses are matched is very important, as CWLP can then invest back into the system. Recently there was a rate restructuring and a $507 million bond sale was completed – the biggest bond deal in the history of Springfield.

Since 2008, according to Brown, the energy market has been inconsistent and he would love to be able to know where the market will be in the future. “It was pretty consistent when I started, but now the market has gone up and down a lot more,” he said. Knowing the market prices and greater harmony with environmental regulations would help in the planning process as well. “It would be nice to plan over a ten year period, but new regulations can nullify strategic planning.”

One major project still being pursued is Hunter Lake. Aldermen recently approved the revisiting of the lake, so according to Brown the project can now move forward. “It comes down to what is best for the community as a whole,” he said. “This could be a regional water supply and we would have the advantage of having a reliable source of water which could help attract future businesses. There are a lot of opportunities for the city of Springfield.”

According to Brown, there is a shortage of engineers in the country, so anyone looking to get into the field should have a lot of opportunities. “Find what you are interested in and passionate about. There are different variances,” he said. “Just put forward your best effort and things will work themselves out.”

Brown looks to stay at CWLP for the foreseeable future. In ten years his children will be out of school  and although he still has a number of years left, Brown feels that if everything falls in line he will retire at age 58. It’s unlikely he will stop working, however. “I enjoy the utilities industry. There may be other opportunities in the future after retirement,” he said. In the meantime, Brown and his family plan to vacation in Orlando in February – where his oldest daughter will just happen to be playing in a fast-pitch softball tournament for the University of Illinois Springfield.

Education:
MBA from University of Illinois in Champaign

Enjoys traveling to the Caribbean

Eric Woods can be reached
at ericw93@aol.com.