Home/Uncategorized/Keep on (food) truckin’
Previous Next

The prevalence of food trucks is a national trend, centering mainly in metropolitan areas and college towns. Springfield has witnessed several forays into roadside dining in the past few years. The Chomp food truck operated by Derrick Woolbright was on the scene for a while, a familiar sight at openings by The Pharmacy art collective among other places, before moving on to Evansville, Indiana.

Cooper’s StrEATside Bistro is the newest food truck on the Springfield scene. Justin and Kendra Cooper have been serving up breakfast tacos, Southwest tacos, garlic French Fries and Coop’s Salad at the Wednesday Farmers Market downtown for several weeks. They can also be found at the Illinois Products Farmers Market at the state fairgrounds Thursdays on a rotating schedule with other trucks.

The Coopers’ food truck is a family affair with various family members helping out on the truck. Justin is the seventh generation of a farm family near Williamsville. He graduated from Lincoln Land Community College’s culinary program and credits director Jay Kitterman with mentoring him to become a chef. 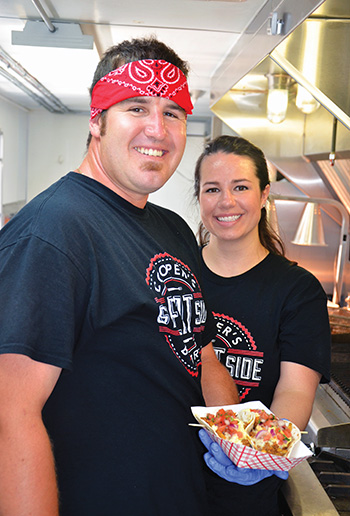 In 2005 he moved to Scottsdale, Arizona, to attend Le Cordon Bleu cooking school. In 2010 he earned a bachelor’s degree in Culinary Management from The Art Institute of Phoenix.

“After culinary school and working in high end restaurants, I decided I wanted to have my own business and be an entrepreneur,” Cooper said. He found a Matco tool truck several years ago, and Justin, his dad, Roger, and best friend Hank Hankins converted it to a food truck according to the Sangamon County Health Department guidelines. Cooper’s StrEATside Bistro served its first event in June, 2013.

The Coopers have done a lot of catering since then. “We catered an outdoor wedding in Williamsville with 320 guests, serving family style in 35 minutes,” Kendra said. They catered a Toast of the Town event recently with a Caribbean menu, and served at the Paint the Street event on Washington St. downtown on July 26.

Not every food truck has a full-blown kitchen. The Dew Chilli Parlor premiered its food truck last September, a former uniform truck they acquired in 2012 and outfitted to heat already cooked food. It has been a familiar presence in the parking lot south of Standard Mutual Insurance building on S. MacArthur since last September, serving its well-known chili, tamales, hot dogs and drinks.

“We’ve had a very positive reception with the truck,” The Dew’s manager Kenny Michelletta said. Ace Sign Company designed the logo and did the graphics. The Dew folks cater parties and weddings as well as serving at Rock the Dock, Taste of Downtown and Downtown Celebration. In January they had a Taste of the Trucks event, with Twyfer’s BBQ truck from Jacksonville, at the Standard Mutual parking lot.

New summer fare includes lemonade shakeups, nachos and chili cheese nachos. The distinctive orange truck will be at Art Fair on the Square in Jacksonville Aug. 23 -24 and at the SOB (Springfield Oyster and Beer) Festival at the Inn at 835 on Sept. 6. “People from outside Springfield call us to cater events,” Micheleta said. “If it’s feasible for us to do an event out of town, we’ll do it.” The Dew truck is also equipped with its own generator, so it doesn’t need a power source to plug into.

When The Dew Chilli Parlor reopened last April at 1216 S. Fifth St. after being closed for almost 20 years, owner Mark Roberts III and Micheletta decided to shut the food truck down on MacArthur and use it only for catering events. The Dew truck does charity events, giving 10 percent of proceeds to organizations such as St. John’s Children’s Hospital.

Two years later he set up a taco cart downtown on Fifth Street outside Marly’s Pub on weekends from 10:30 p.m. until 3:30 a.m. He served night owls and helped grow Chadito’s business for five years, even winning a “Best Late Night Food” award from Illinois Times.

Eventually he thought a food truck would be good advertising for his brick and mortar restaurant. He knew food trucks were very popular on the East and West Coasts, and his food truck was the first to hit Springfield streets in 2011, the same year Reese was recognized by the Springfield Business Journal’s 40 Under 40 program.

He acquired a 1985 Chevy P-30 step van in pretty rough shape. “We gutted it and brought it up to code,” Reese said. “It has a stove, fryers, griddles and sinks. It’s a restaurant on wheels.”

One of his first events was catering the MacArthur Boulevard Art Fair in 2011. “It was 128 degrees in the truck that day,” Reese remembered. Last year the Chadito’s truck did 32 different events, including weddings, the Sangamon County Fair, car shows, a Carillon Society event and the Fat Ass 5K pre-party. The truck’s menu includes sanchos, tacos, nachos, taco salad and fried pickles.

“We do block parties too,” Reese said. “We have our own generator, so we can go anywhere in Sangamon County. Our client base in New Berlin is huge.”

“It’s been a labor of love, trial and error,” Reese said. “It’s a great way to connect to our customers.”

Ginny Lee is a regular contributor to the Springfield Business Journal as writer and photographer.